Frue Flu, I'm thankful for you.

The last five days haven't exactly been what we planned for our first Christmas at home.  We usually travel to be with extended family for the holidays, but this year Todd felt strongly that we should be home as a little family...oh how happy I am that he was led by our Sovereign God!  I don't think the folks on the airplane would appreciate the Frue Crew this Christmas...

(to be sung to the tune of Twelve Days of Christmas) 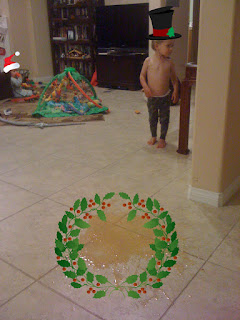 My apologies for those with weak stomachs...my mind must also be sick ;)

If that hasn't made your stomach turn, this will:  I'm THANKFUL for the Frue Flu of Christmas 2011.  We have spent more time snuggling, giggling, enjoying, and resting than the last I-don't-know-when.  We caught up on our Advent stories and ornaments that we missed from being so busy this month.  We were able to "just say no" to calls and invites without feeling guilty or being tempted to drag our children to another holiday happening.  We sang lots of Christmas Carols and talked about them.  We joked and told stories and watched movies and worshipped Jesus together.  It's been a Christmas centered around Christ, just how we wanted it to be...how sad that we need a virus for that.

But here's the epiphany: we didn't have ANY discipline issues--because the boys' love-tanks were full even if their stomachs were continually emptied.  And sweeter still, Todd and I got along the whole time of quarantine and cared for each other and the boys sincerely and tenderly without grumbling or self-seeking.

"But He said to me, 'My grace is sufficient for you, for my power is made perfect in weakness.' Therefore I will boast all the more gladly of my weaknesses, so that the power of Christ may rest upon me.  For the sake of Christ, then, I am content with weaknesses, insults, hardships, persecutions, and calamities.  For when I am weak, then I am strong."
2 Corinthians 12:9-10

Thank you Jesus for coming to us, in our sin and sickness, and bringing us Your joy.  Like the Christ-child in a manger, we thank you for sending us gifts that come in the least-expected ways.
Tonight we celebrate YOU. 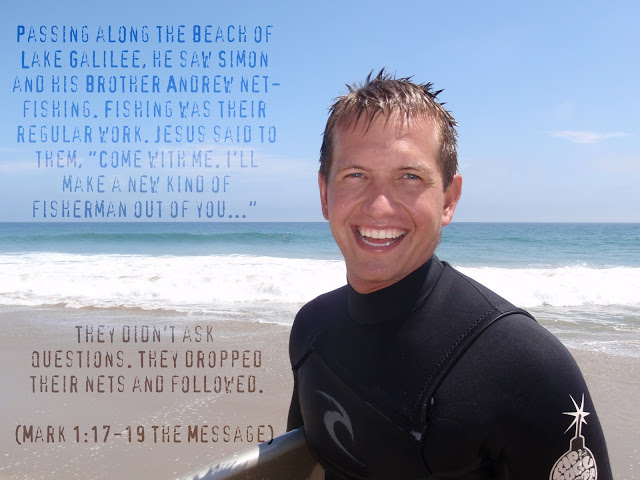 We knew this day was coming when we'd see the end of Todd's Naval career and the beginning of a new adventure. That day kinda snuck up on us. When Todd made the hard decision to resign from the Navy and made the phone call to his order detailer, we had no idea what we would do instead, nor where we would live, or what we would live on for that matter. But when Todd hung up the phone he heard a familiar voice whispering, "Drop your nets and follow me."

So we did. When Jesus called those fishermen turned disciples, the sea was their livelihood. That's all they knew. His call didn't include a promise of more lucrative ventures (at least not in the currency they knew) nor did they review a retirement plan (at least not the one they were imagining). They just followed two orders: drop what you know, and follow.

It's been a nail biter as we take this step of faith, and there were more than a a few times we looked at each other like we were loony. But now that the puzzle pieces are coming together (ask me about the perfection about God's timing) we're seeing a sweet picture that we couldn't have painted ourselves.

Today Todd receives his honorable discharge from the Navy, so while his parents were in town, we threw him a surprise party to celebrate the years past and, God willing, the years ahead. We invited the men and their families who have been along side him in these decisions and we enjoyed reflecting and rejoicing in the work God has done in this man of mine.  We roasted him, we toasted him, and best of all we gathered around and prayed for him. 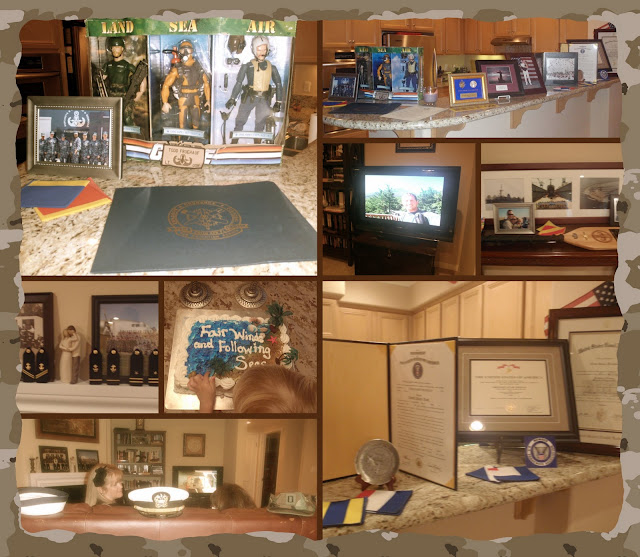 "It's really fun to look around and enjoy all of the cool things you've done. To recognize the heroism and bravery and GI Joe-ness of your adventures and it has it's place--today is the day to reflect, and honor, and recognize the days past. Thank you for what you gave in order to serve our country.

But tonight I don't just want to reminisce on the good old days--I want to rejoice in the days to come as you answer a much higher calling and purpose for a far more lasting country.

One would say from these pictures that you have served alongside men of valor, honor, and courage. It was even a grand opportunity you had to screen for the group of men who receive their special operations from the President himself.

But as I look around the room I see a far greater band of brothers. Who you serve and fight with now are armed with weapons that are not of this world and who receive their marching orders directly from the King. These, and you with them, Todd, are mighty men of valor.

You walked away from your Rambo dreams to serve the Lord and love your family and you join the ranks of men who do the same, undercover and out of the glory beams.
You're on a new mission now.

What I recognize is that when you're on special ops with the kingdom of God, no one is taking your picture. You won't find an action photo of you encouraging a struggling brother at the coffee shop. But the courage it takes to be honest, loving, and truth telling
saves more than a life, but a soul.

There aren't Man of God or Loving Husband and Father GI Joes. No one hands you a plaque for exceptional service, or even recognizes your acts of heroism. Your wife and sons may be the only witnesses of your acts "above and beyond the call of duty."
And it's good.

From the Navy you have received your reward and recognition for your hard days of work in bronze and gold and silver medals. From this point on, your reward is of far more lasting material. And your praise is being deferred to the One who is forever worthy of praise.
I know that this brings you joy.

You may not ever hear "Bravo Zulu" again...but by His grace you will hear "well done"
and your reward will be Christ Himself.

Tonight I celebrate the man you were and rejoice in the man you are and are becoming in Christ. To the glory of God." 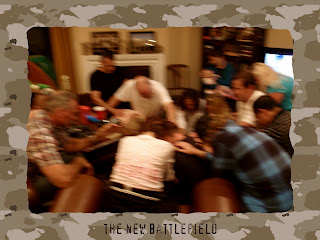 Email ThisBlogThis!Share to TwitterShare to FacebookShare to Pinterest
Labels: Todd

Two zillion trips back and forth and more junk piles dumped and donated than I'd like to admit, we're finally moved into our new place. You'd think moving into a smaller condo down the street and "simplifying" would be easy...yeah, I thought that too. At one point once our practical things were moved into our new place, I considered striking a match to that monstrosity of a house and it's equally large stacks of "what do we do with this?". If it weren't for our precious neighbors we shared a wall with, Todd would have been putting his explosive expertise to good use.

Seriously, I missed my husband and children while I was hacking through the thick jungles of junk. Thank the LORD I found my way out (just don't peek in my closet, you might find some vines still hanging).

So a week of my life was dedicated to sorting temporal possessions instead treasuring the ones running and playing in the midst of them. God forbid we accumulate anything more than memories in this new home! 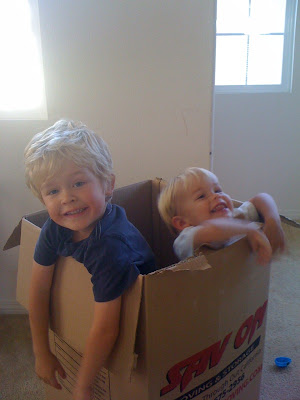 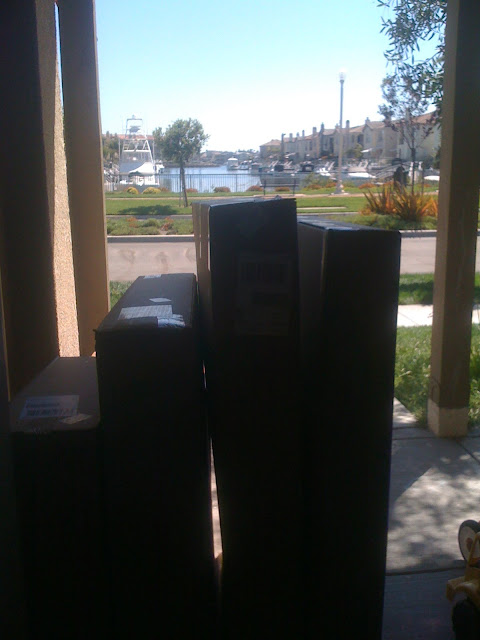 Well, the boxes have arrived.  The boxes of boxes for our move this weekend.  How on earth I am going to fit all of our belongings and possessions into these boxes is beyond me.  I don't think it's possible...and I think that's the point.  We're ready to simplify.  We've picked a much smaller apartment/condo down the street with no garage to conveniently stash those things we haven't been able part with the last five times we've moved.  That is, unless the neighbors don't mind our junk lining the hallway...

So that's the idea. Not easy, and my idol factory of a heart sure is fighting it.  But resolved, Craigslist will now be displaying my "treasures" so that we can be more focused on our lasting Treasure in heaven.  For Heaven knows these dusty things have no place there.

Home is where your school is.

Since Lion still has one more year before he should be "officially" educated, I've decided to try my hand at homeschooling my little preschooler. If it all goes well I may *gasp* join the ranks of "those people." Heck, I'm a Christian stay-at-home-mom with three children and drive a minivan--what other stereotype could I fit? With a couple more weeks before we launch into full Pre-K curriculum, I'm gathering my encouragement and inspiration from wiser women who've gone before me (in their suburbans and economy vans). I couldn't be more excited--or more out of my mind--we'll see how it goes. Front porch lesson number one: math, social studies, and recess... 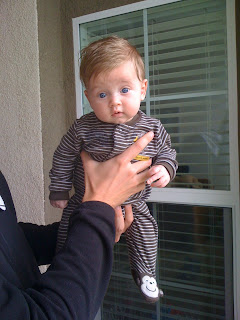 "What are you waiting for, mommy? Start blogging! Right after you feed me, burp me, change my diaper, change my clothes because I just spit up all over myself, make my big brothers a snack, slay a dragon with Lion, vroom cars with Bear, give me tummy-time, transfer our laundry to the dryer, fold daddy's clothes, rush to an urgent call from the potty, mop the bathroom floor, listen to the voicemail of the call you just missed, put away those Legos you keep stepping on, make lunch for Lion and Bear, put said brothers down for a nap, feed me again, repeat diaper process, and then I'll irresistibly coo and smile with you until you doze off into a nap with me snug in your arms, dreaming of the day that you have a flash of time and creativity to blog..."
Pecked by Tracy Frue at 10:59 PM 3 comments: